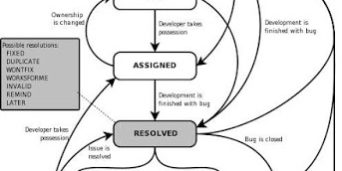 Bugzilla is a very known bug tracking tool where testers normally raise or keep track of bugs in each release of product.
It’s most essential to know the details of how to raise a new bug or keep track of all the raised bugs so that the testing process become smoother. A bug can be raised with status NEW or UNCONFIRMED –
NEW – A bug found with proper reference of requirement.
UNCONFIRMED – When a bug is found with out any proper requirement or any specific reference or unsure bugs (in this status, developer try to get the design document or can consult with the business analyst to make sure if the bug is valid or not).
If it is a valid bug, developer will move the bug to NEW status and takes the responsibility to fix the bug by assigning to him self or if necessary to respective module developer)
If it is not a valid bug or no reference found from developer or business analyst, the bug will be moved to INVALID and CLOSED at end of release.

After the bug is in NEW status, it will be ASSIGNED to the respective module developer who try to study the details about the bug and fix the bug –
after assigning the bug to the developer, the bug can be either in FIXED (if developer fixes the bug), DUPLICATE (if any existing bug with the same details raised by some other tester), WONTFIX (if the developer team not able to fix the bug), WORKSFORME (if the product is behaving as intended), INVALID (if the bug is bogus), REMIND ME LATER ( if the bug is of less priority or cann’t fix in this build or release).

In case of bug is in INVALID/WORKSFORME, it’s tester’s responsibility to recheck/review the bug details and let the developer know more about the bug if it is really an issue and the tester can REOPEN the bug or else the bug status can be moved to CLOSED status at end of release.

If the bug is FIXED/RESOLVED, tester need to retest the same bug and can move to VERIFIED (if the bug is really fixed) or can move to REOPEN is still having issue after fixing.

NOTE – the above mentioned details are as per my experience, some companies may customize the bug template, almost all the bug tracking tool more or less follow same procedure.

Have fun in breaking the product to raise bugs!!!!!

what is build and release in software testing
July 11, 2016